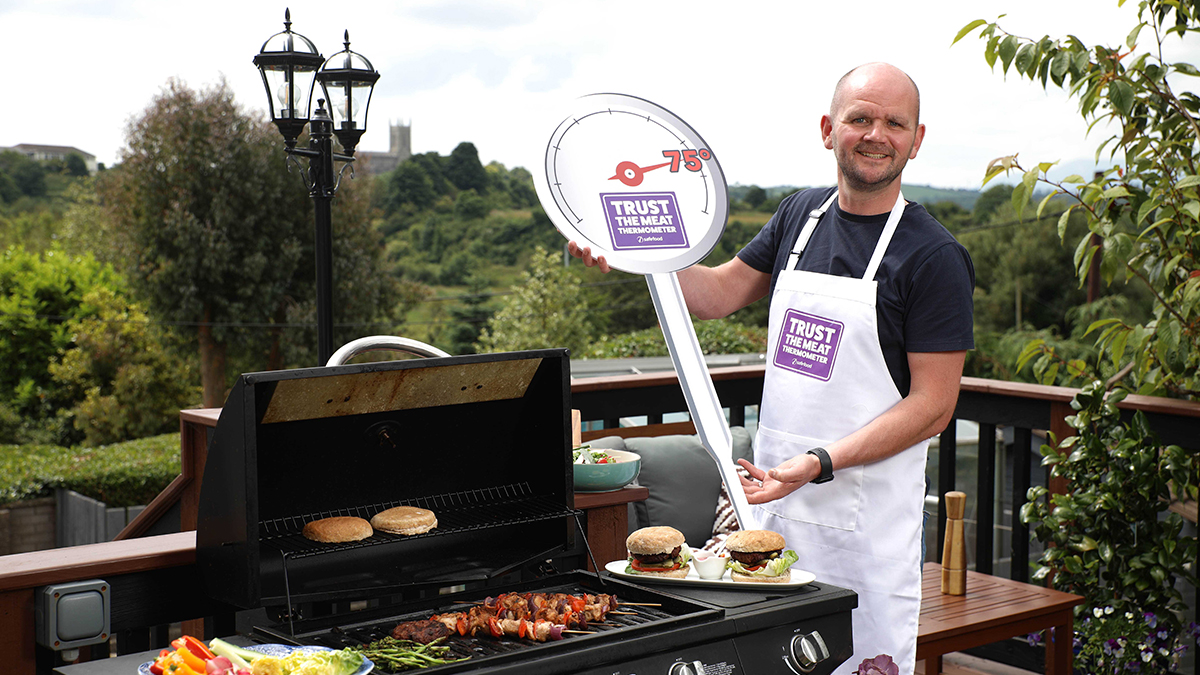 Friday 9th July 2021: More than half of Northern Ireland’s home cooks (55%) could be in danger of giving friends and family food poisoning, because they’re unsure about how to barbeque meat to the correct temperature.

And according to new research by safefood, fewer than 2% of people are following all the basic food safety checks to ensure barbeque meat is cooked correctly. The meat should be piping hot all the way through, juices should run clear when pierced and there should be no pink meat.

As barbeque season arrives, safefood is calling on home cooks to use a meat thermometer to protect their family and friends from a barbecue disaster over the July holidays.

safefood is advising cooks to get it right by double checking that their burgers, chicken and sausages are cooked to 75 degrees Celsius on the barbecue - even if they are experienced at barbequing.

Previous safefood research revealed that over a quarter of cooks (27%) in Northern Ireland admit to having dished up a barbeque disaster, and one in ten admits that their guests ended up sick after eating meat that hadn't been cooked properly.

“For many of us, a barbeque is one of those social activities that we can currently enjoy; all we need is our favourite BBQ foods, salads, and a barbeque to cook them on. But if there’s one item to bring to your barbeque this summer, it’s a trusty meat thermometer. Take your food off the heat, pop the thermometer in the thickest part of the meat and when it reaches 75 degrees Celsius, then it’s cooked and ready to eat.

“For meats like burgers, sausages, chicken, and kebabs, it is important that they are cooked until piping hot, with no pink meat and the juices running clear. Using a meat thermometer adds that extra layer of reassurance. If you’re cooking steaks, these can be cooked to preference.”

Meat thermometers aren’t just for professional chefs, but can be a vital tool for home chefs as well, safefood says.  People mistakenly believe the home is the least likely source of food poisoning, yet it’s where up to two thirds of foodborne illness originate.

However, fewer than one in five people in Northern Ireland actually own a meat thermometer, and just one in six of those owners admit to using it regularly.

Dr Lynsey Hollywood, Lead Researcher and Manager of the Food & Drink Business Development Centre at Ulster University said: “What was interesting from the research was the low level of meat thermometer ownership and usage. We also found that people perceived meat thermometers as being only for professionals, troublesome to use and expensive to purchase.

“However, they are a fool-proof tool, easy to use, can be purchased for as little as £8-10 and are widely available from home-retail and hardware outlets.”

Supporting the campaign, local home chef, Darragh Milligan, also known as Belfast Undercover Chef, said: “Many of us have been waiting a long time to invite our friends and family for a barbeque in the sunshine - but let’s not make it an unforgettable barbeque for all the wrong reasons.

“It’s every home cook’s nightmare that their barbeque dining experience goes up in smoke by inadvertently making their friends and family sick after serving up food that wasn’t cooked properly.

“No matter how much of a barbeque star you think you are, it’s important to ensure you cook foods like burgers, chicken and sausages thoroughly. I want to encourage home cooks to up their grill game by using a meat thermometer to take the guesswork out of cooking meat - it’s just as important a tool for barbequing as the grill itself,” he says.

safefood’s 7 top tips for a safe and tasty barbeque

For more information or to request an interview, please contact: