Salmonella in pork on the island of Ireland 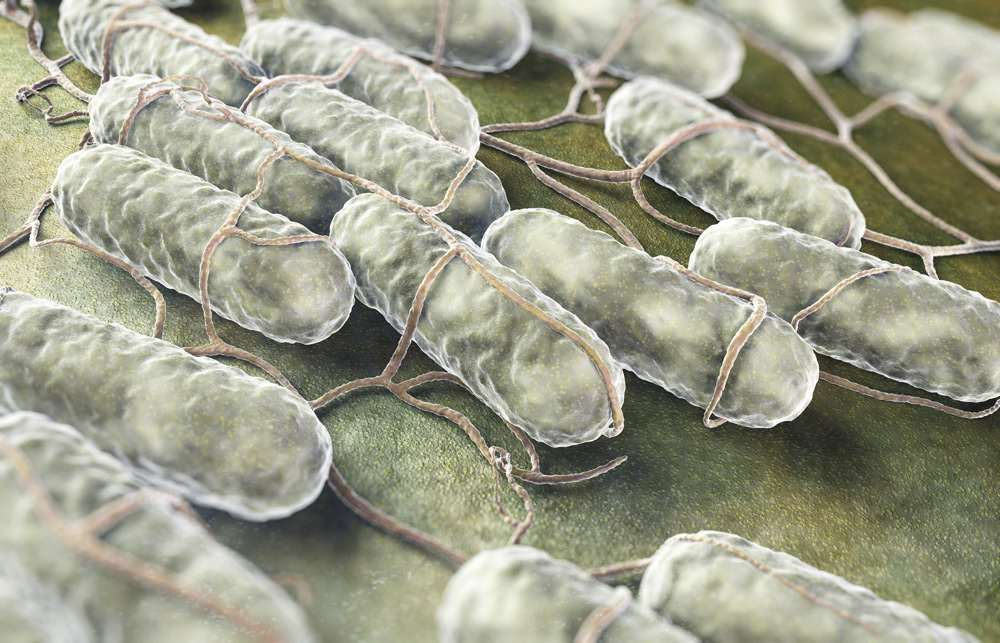 A study was carried out on the occurrence of Salmonella on pork on the island of Ireland and an assessment of the risk factors contributing to its transmission. It included microbiological studies to track the Salmonella status of individual pigs through the pork chain from farm to primal cuts. Studies on the Salmonella status of pork cuts in boning hall, and on raw pork cuts at retail were also undertaken. A quantitative microbial risk assessment model was developed for Salmonella on pork cuts covering the chain from slaughter to boned-out cuts.

Prevalence and transmission of Salmonella in the pork chain

Salmonella spp. were recovered from 24 of 720 (3.3%) pork cuts sampled in boning halls of pork abattoirs in the Republic of Ireland (ROI) and from 44 of 525 (8.38%) pork cuts in Northern Ireland (NI). The difference in prevalence is not statistically significant between jurisdictions. The key finding was the enormous variation in Salmonella prevalence on different sampling days, 0 to 31.6% in ROI and 0 to 52.5 % in NI. In both jurisdictions, the prevalence and numbers of Salmonella on pork cuts was significantly higher on cuts taken during the afternoon production than the morning production. Enterobacteriaceae levels also increased over the course of the day. Genetic fingerprinting showed the same Salmonella isolates on equipment and cutting surfaces in the boning hall and on pork cuts taken on the same day; indicating the role of cross contamination in transmission of the pathogen. On particular days of operation, it was shown that the same Salmonella strain could persist on cutting equipment and surfaces throughout the day contaminating large volumes of pork. On days that Salmonella prevalence was high, Enterobacteriaceae counts were also generally high indicating breakdowns in hygiene and that monitoring this group of microorganisms could be useful in controlling Salmonella. A better understanding of variability in the prevalence of Salmonella between factories and on different production days was considered essential in reducing overall risk.

Salmonella on pork cuts at retail

Tracking Salmonella through the pork chain

In ROI, the Salmonella status of pigs from selected herds of different historical serological categories (as determined by regulatory programme) was tracked from the farm through transport (before and after loading pigs and after washing of trucks) and lairage (before and after pigs entered). After slaughter each individual pig was tested for Salmonella by examination of caecal contents, rectal faeces, carcass swabs (before washing and chilling, and after chilling) and pork primal cuts. In NI, a smaller tracking study on the Salmonella status of individual pigs at the slaughter stage was conducted. Overall, the study showed that transport of pigs in contaminated trucks has the potential to allow Salmonella negative pigs to become infected. Cold power washing of trucks was inadequate at removing Salmonella and, in some cases, trucks were more widely contaminated after washing. The lairage areas were often highly contaminated with Salmonella spp., posing a risk for incoming negative pigs particulary for Category 1 herds. In Category 3 herds, Salmonella was present in the caecal contents of 45% of pigs and 95% of the Salmonella they carried were traced back to the farm of origin. In Category 1 herds, Salmonella was present in 16% of pig caecal contents and 71% of these Salmonella were traced back to the lairage. From Category 2 herds, 72% of animals were caecally positive for Salmonella. The study highlighted that there is in general, no correlation between the historical Salmonella serological herd Category and actual bacteriological status of an individual pig at the time of slaughter.

Tracking and genetic fingerprinting of Salmonella recovered from the pork chain showed that contamination of carcasses and pork cuts could be introduced from the pig’s own caecal or rectal contents (faeces) during slaughter and dressing. Contamination often occurred from other pigs during transport, lairage, or contact with contaminated pork cuts, equipment, surfaces etc during processing and distribution. Cross contamination within the slaughter plant environment accounted for up to 69% of contamination on carcasses and pork cuts. However, while cross contamination was shown to potentially occur at many different stages in the chain, it was intermittent and variable. There were very clear differences in the prevalence of Salmonella between different factories, and between different days of slaughter. This was evident in both ROI and NI plants.

S. Typhiumuium (~50%) and S. Derby (~20 %) were the dominant isolates recovered from pork but many others serotypes were also recovered and most of these isolates were antibiotic resistant, indicating that they would be difficult to treat clinically.

The risk model was created in Excel with the add-on package @RiskTM (Pallisade Corporation, New York, USA) and followed the chain from where pigs were presented for slaughter through to boned-out pork cuts.

The model estimated that Salmonella prevalence on pork cuts from ROI boning halls was on average 3.9% (95% CI 1.6-8.2%). This output was validated against a microbiological survey of Salmonella on pork cuts in ROI abattoirs (mean 3.3%; 95% CI 2.0-4.6%) carried out in commercial pork abattoirs as part of this research project, which indicates that the level of contamination predicted by the model and the actual survey results were similar.

Using NI data for Salmonella caecal carriage based on a study by McDowell et al., (2007), the simulation model estimated that the Salmonella prevalence on pork cuts produced in NI was on average 4.5% with a 95% CI of 0.33-12.65%.

The research indicated a need to implement measures to reduce cross contamination during transport, lairage, processing and at retail level. An understanding of why there is such variability in cross contamination and prevalence of Salmonella between factories and on different production days would greatly assist in reducing overall risk.

The expert study indicated that the most effective interventions at the on-farm stage of the pork supply chain are likely to be (1) Good Agricultural Practices (GAP) and hygiene measures with all in/all out policies, (2) appropriate feed and (3) education and awareness. However barriers to the success of these include the costs involved in implementing GAP and hygiene measures in practice, high feed costs and resistance of people to change.

At the lairage stage the potential control strategies indicated by the expert group included (1) minimising the amount of time that pigs spend in the lairage prior to entering the slaughterhouse (2) improved cleaning of the lairage to reduce/prevent cross contamination (3) separating herds from different farms and separating different Category herds through to slaughtering. Potential barriers to their success included just-in-time delivery difficulties which may impact on holding times of pigs in the lairage and cost associated with additional cleaning and changing current lairage designs.

At the stage of slaughtering/processing, the top rated interventions recommended were (1) careful evisceration (2) bagging the bung and (3) logistic slaughter. The main barrier impacting on the success of careful evisceration and bagging the bung is poor employee training. Issues regarding pig herd Categorisation (with poor correlation between the historical serological status and the actual Salmonella bacteriological status for individual animals at the time of slaughter as shown in this study) can act as a barrier to success of logistic slaughter in practice.

In conclusion, Salmonella has the potential to enter and spread at all stages of the pork supply chain and therefore control must involve a farm to fork approach. A general consensus among the expert group was that the utilisation of a combination of interventions is imperative; with no single intervention likely to have an impact in isolation. There are many potential barriers impacting the success of interventions in practice and that cost and safety will always be comprised against each other. This highlights the need to combine risk modelling (which can predict risk reduction) with cost benefit analysis for potential interventions.

This present study observed that pigs presented for slaughter on the island of Ireland are frequently infected with Salmonella. During the slaughter process the pathogen can be transferred to the meat. Categorising the pig herd based on a historical serological testing for the presence of Salmonella was not shown to be a good predictor of the bacteriological Salmonella status of individual pigs at the time of slaughter. However, it is acknowledged that serological testing does help in giving a rough estimate of the overall Salmonella status of a pig herd and the risk model showed a linear correlation between prevalence of Salmonella in caecal contents and on pork cuts at factory level. Therefore if the number of herds presented for slaughter with high levels of Salmonella (Category 3) was reduced, there would be less potential for contamination of the lairage, equipment etc and so less Salmonella contamination on pork.

The impact of cross contamination during transport, lairage, processing and distribution cannot be ignored and measures to reduce this would significantly reduce the dissemination of Salmonella in the chain and the risk posed.