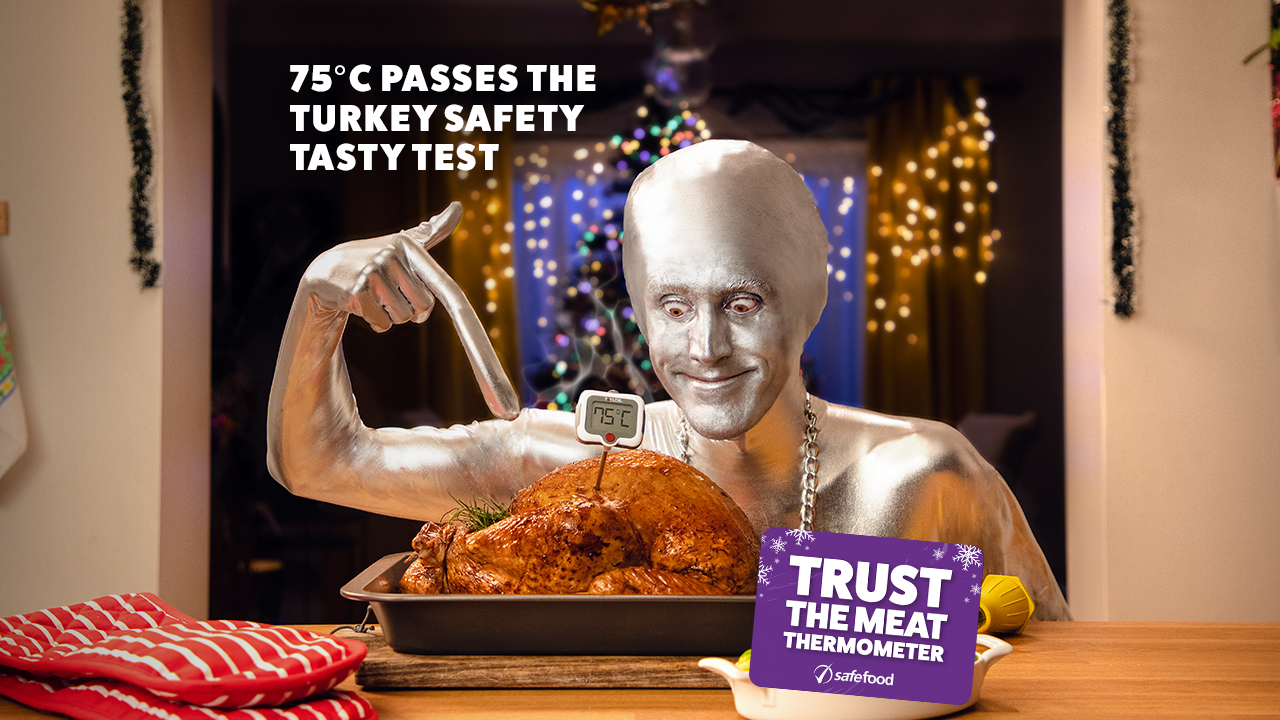 Linda: What about food safety myths like a turkey should always be washed or you know it's cooked when the cooking time is up. We at The Curious Consumer podcast are on a quest to demystify food safety and to separate fact from fiction. I'm Linda Gordon, food microbiologist from safefood.

Linda: Did you know that safefood’s turkey cooking time calculator is our most popular webpage? Why? Because of Christmas and Thanksgiving. Cooking turkey for Christmas is said to have started with Henry the Eighth and then revived in Queen Victoria's time when turkey was cheap enough to buy and big enough to feed a family and have leftovers. And since then, it has stuck. In the US author Sarah Josepha Hale is credited with making turkey synonymous with thanksgiving in her 1827 novel Northwood, where she gave a chapter to describing a New England Thanksgiving with roast turkey. She also campaigned to make Thanksgiving a national holiday, which Abraham Lincoln eventually did in 1867. Today I'm joined by Dr. Aileen McGloin, Director of Communications at safefood to talk about how we shape food safety habits through research and behavioural change interventions.

Linda: Hi Aileen. Cooking traditions are often passed down through generations. In fact, in our research on the use of meat thermometers on the island of Ireland, almost 50% of our focus group participants said family was their source of information on the safe preparation of meat, followed by instructions on the packaging.

Aileen: Okay, so family, packaging, friends and the internet all play in how we cook. But what about the three checks safefood has encouraged for decades, Linda? To check that there's no pink meat, juices run clear and that the meat is piping hot throughout.

Linda: Exactly Aileen. Our research found that less than 2% of people use all three checks to make sure their meat is properly cooked. We commissioned the research to develop an evidence base around the use of meat thermometers, because meat is a common source of foodborne disease and a public health concern. We wanted to look at current perceptions and consumer behaviours around meat thermometers on the island of Ireland, to look at barriers and motivators to getting people to use them and develop insights into promoting meat thermometers as an extra reassurance that meat is cooked properly.

Aileen: And that research also informed how we developed our public health campaign for both the summer barbecuing and yes, you've guessed it, cooking turkey. Whether you eat at Christmas or Thanksgiving, or both.

Linda: For our research into meat thermometers, we reviewed previous academic studies, held focus groups across the island of Ireland and conducted a big consumer survey. And we found that just under 16% of people use a meat thermometer when cooking meat. While, 17.4% stated that they own one. So, a small usage gap there but not surprising. Most people had never used a meat thermometer or even thought about it. The research recommended that we begin to encourage people to use a meat thermometer and educate them about how to do it properly. 75 degrees Celsius is the temperature that meat must reach to be cooked thoroughly. Our research also looked into what might encourage people to use a thermometer and what might discourage them. Important points that came up were things like using social media, TV and radio ads, as well as trusted sources of information like family friends and local butchers

Aileen: All health behaviours relate to people's capability, opportunity and motivation to carry out that behaviour. So, when we were planning our campaign, we started with the understanding of the food safety behaviours from our research, as Linda explained, and then we developed our communications campaign to see how we could increase capability, opportunity and motivation to buy and use a meat thermometer. In terms of capability, we knew that there were a few things that needed to change. For example, people needed to know the 75 degrees message, they needed to know how to use a meat thermometer to pop it in the thickest part of the meat between the breast and the leg. And they needed to know that it wasn't that expensive.

In terms of opportunity, we wanted to make meat thermometers more visible. For the Christmas campaign. We advertised during the sales around Black Friday to encourage people to add a meat thermometer to their basket. And we've partnered with the butchers. If you popped into your butchers, you could pick up a leaflet or have a chat. The butchers are obviously very knowledgeable on this. In terms of motivation, prevention of food poisoning is our ultimate goal. We avoided focusing on motivational message around preventing food poisoning this year, we felt that in the context of a pandemic, people have had to take on so much health messaging, they wouldn't be open to hearing more negativity. Instead, our messaging takes on a light hearted approach, focuses on the positivity of getting the turkey just right and celebrates your identity as an inner chef.

When barbecuing, use a meat thermometer pop it in the thickest part of the meat until it reaches 75 degrees Celsius, and it will pass the safety and tasty test every time. A message from safefood.

Aileen: Okay, so you've just heard the ad from our barbecue campaign in the summertime, and research following that show that our campaign is working. Of those who owned a meat thermometer in Ireland, 6% had bought it in the previous six weeks, i.e. during the campaign period, while this rose to 10% in Northern Ireland, so that was a really good result.

Linda: So, a meat thermometer is not just for Christmas. We hope the meat thermometer will help reassure hardworking cooks, and take the guesswork out of cooking the Christmas turkey and other poetry as well as barbecue burgers, sausages and any meat that needs to be cooked the whole way through.

Aileen: So, it's snow joke. Trust the meat thermometer and you will pass the safe and tasty test with your turkey.

Linda: Indeed, that's one Christmas joke we should all remember. So that's how scientific research into food safety behaviours and attitudes can help develop public health campaigns that prevent food poisoning. And thanks to Aileen for helping us explore how we can use evidence and behaviour change theory to improve food safety.

Are there any food safety myths or theories that you'd like us to dissect for you? Let us know by emailing us at [email protected] or messages on the usual channels, Facebook, Instagram or Twitter at safefood.net Until next time, thanks for listening.