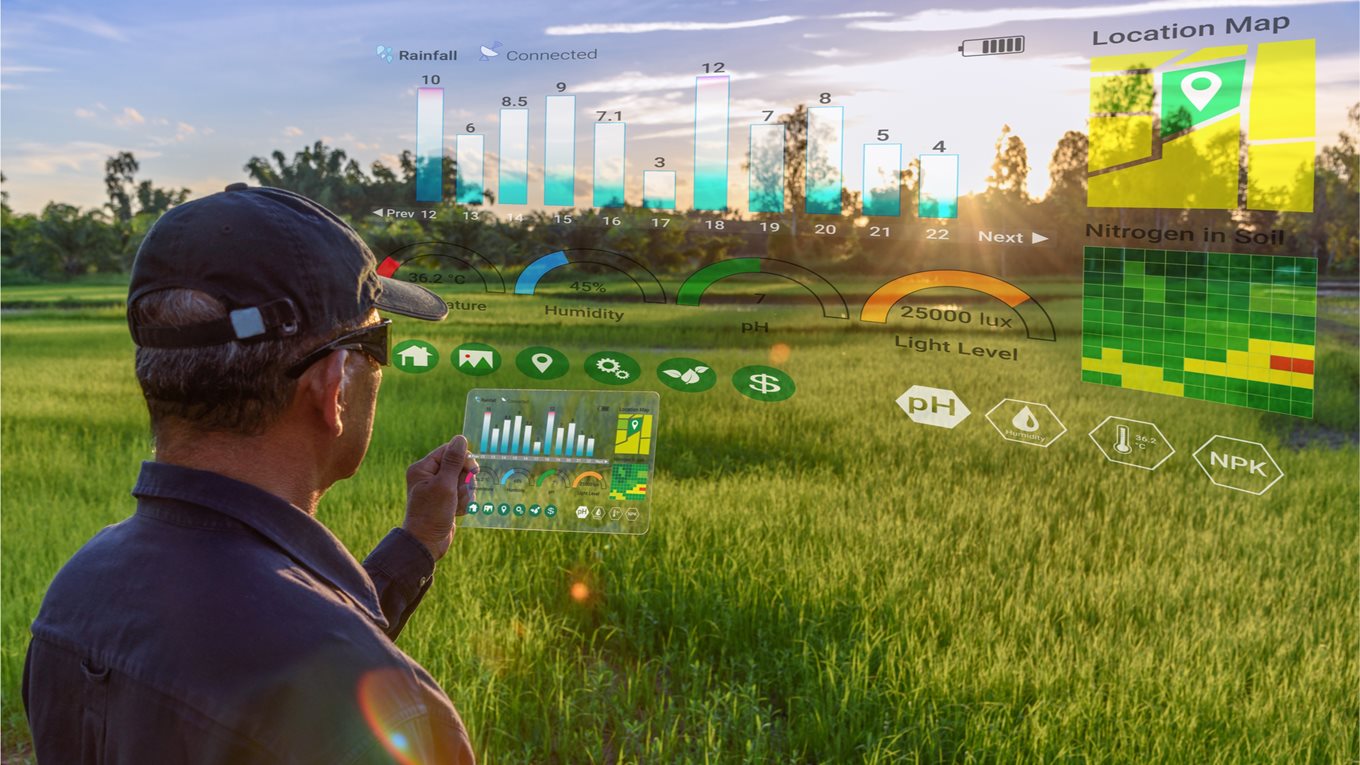 Can the fourth industrial revolution change food for the better? The potential for technology to transform our current food system is much vaunted, but there are question marks over who really stands to benefit. Journalist Nick Hughes reports.

Human progress has been inextricably linked with the supply of food for as long as man has walked the earth. The discovery of techniques to grow crops productively took early humans out of the forests and onto the land; the mechanisation of production during the first industrial revolution took people off the land and into factories; and most recently, the growth in internet shopping is taking people out of the supermarkets and allowing them to order groceries from the comfort of their own homes. Our desire to produce and consume food more efficiently has been a key driver of technological innovation. We now stand on the brink of a fourth industrial revolution and food is once again set to be at its heart.

Klaus Schwab, founder and executive chairman of the World Economic Forum headquartered in Geneva, who quite literally wrote the book on the fourth industrial revolution, describes it as building on the third industrial revolution that is the digital revolution that has been occurring since the middle of the last century. Both revolutions are characterised by a fusion of technologies that is blurring the lines between the physical, digital, and biological. However, Schwab argues that they are distinct because the velocity, scope and systems impact of the fourth revolution has no historical precedent in terms of the rate at which it is evolving and is disrupting almost every industry sector, whilst transforming entire systems of production, management, and governance.

Food is no exception. There is little doubt that the linking of billions of people by mobile devices with emerging technology such as artificial intelligence, robotics, 3D printing, and genome sequencing has the potential to transform our entire relationship with food, from the way it is grown, processed and transported to how it is consumed and disposed of. More than this; advocates of this new technological accessibility argue it will enable the democratisation of a food system that has left many citizens feeling disenfranchised and powerless. A revolution in communications and data, so the theory goes, will give people the power to change the food system for the better, be they the end consumer, the smallholder farmer or the niche independent producer. By harnessing the technologies of the fourth industrial revolution we have the potential to improve the sustainability, quality, safety and integrity of the food supply chain.

Whether the fourth industrial revolution can actually deliver on such promises remains to be seen, but all the evidence points to the need to transition away from the status quo. Among the discussions at the Belfast Summit on Global Food Integrity in May of this year, a common thread that emerged was the urgent need to change our food system to adapt to 21st century challenges. Addressing the conference, Dr John Bell, director for the bioeconomy in DG Research & Innovation at the European Commission, cited the food system’s contribution to global issues such as climate change, waste, obesity and malnutrition as evidence of the need for a paradigm shift:

“We built a food system in Europe that was based on scientific advice and for almost 20 years that has survived a number of particular challenges and crises. But we find ourselves entering a new, systemic set of challenges and our food system is at the centre,” said Bell.

The industrialisation of the global food industry that has been in train since the latter half of the 19th century has left the modern consumer more removed than ever from how their food is produced. High profile food scandals such as the adulteration of beef products with horsemeat in Europe and the adulteration of infant formula with melamine in China have only served to increase the level of public anxiety about what really goes on behind the factory gate. Bell warned food companies that trust should not be considered an intangible asset: “Trust is the currency of democracy and increasingly food is part of the war on truth: it’s commercial, it’s political, and it’s informational. How do you build public trust at a time when science itself is under threat?” Bell went on to argue that the public contract between science and society over the food system needs to be renewed. “Food is becoming a touchstone for democracy,” he said. “The table is the place where most people experience security and governance. The world we’re moving into has to be fit to ensure that the levels of predictability, safety and security that the last generation had will be there for future generations.”

The extent to which new technologies can offer such certainties is not yet clear. Certainly, technological innovations are revolutionising the food supply chain as we know it. The UK government recently commissioned an industry-led review to explore how UK manufacturing can benefit from digital technology. It identified a £55.8bn opportunity for the food and drink sector to adopt current technologies over the next ten years. These include the use of robotics, automation, and connectivity to increase efficiencies in food processing. There is also a potential to improve traceability by connecting the whole supply chain through innovations such as the Internet of Things, blockchain technology, Cloud data architectures, and data analytics. Blockchain, in particular, received numerous namechecks at the Belfast Summit. The technology allows supply chain information to be held on one digital ledger which is accessible and visible to all parties, from the farmer right down to the supermarket shelf stacker. It is immutable as the entries cannot be changed retrospectively. Advocates believe blockchain is a game changer for supply chain transparency. However, sceptics claim that currently the technology is neither useful nor effective.

The ubiquity of smartphone devices, meanwhile, promises to unleash a wave of ‘citizen science’ with the unprecedented potential to put food information in the hands of the end user. At the Belfast Summit, Dr Pier Luigi Acutis, head of the Genetics and Immunobiochemistry laboratory at the Instituto Zooprofilattico Sperimentale Del Piemonte, presented ‘FISHUB.’ This is a mobile app for fish species identification, which is being developed to allow users to determine species through photo analysis and compare the result to what is stated on the label. Dr Acutis and his team are also carrying out exploratory work on a near infrared spectrometer connected to a mobile phone via Bluetooth, for which a recent trial recorded 96% accuracy of biorecognition. Smartphone-based food analysis certainly promises to give consumers greater assurance over the integrity of their food. However, there are risks attached to using the public as an additional data source in validating supply chains and measuring emerging risks. Potential issues include poor quality or badly performed tests, unrepresentative sampling, or deliberate misinformation.

Not only will the fourth industrial revolution see citizens take greater ownership of science, but it will see all of us become subjects for more targeted interventions. To borrow the words of Prof Michel Nielen, principal scientist at RIKILT Wageningen University & Research: “The fourth industrial revolution will be about measuring man.” Take, for instance, the growing interest in the human microbiome - that diverse bacterial ecosystem in the gastrointestinal tract. By linking biology with technology, scientists are increasingly able to identify the dietary requirements of an individual paving the way for personalised nutrition. When coupled with developments in 3D printing it’s not a huge stretch to believe that in ten years’ time people will be printing their own food that meets their unique nutritional requirements. Dr John Bell told the Belfast Summit delegates he believed the opportunities coming from linking biology with digital technology were significant, but added there is a need for increased investment in science, innovation and regulation in this area.

Which brings us neatly back to the issue of food democracy. One of the questions posed during the Belfast Summit was whether there was equity in innovation and the extent to reach technological progress was reducing inequalities in access to safe, nutritious, authentic food. Klaus Schweb has written that the fourth industrial revolution has the potential to raise global income levels and improve the quality of life for populations around the world. However, he notes that, to date, those who have gained the most from it have been consumers able to afford and access the digital world. Speaking during a panel session at the Belfast Summit, Renata Clarke, Senior Food Safety and Quality Officer at the Food and Agriculture Organisation, said there was a “very real risk” that the increased sharing of data could undermine the advancement of smallholders by favouring others that can access these services. Clarke added that there is a need for more societal engagement in new innovations and to understand what citizens want. If a better food supply chain is to be a defining feature of the fourth industrial revolution then citizens will need to be engaged on their own terms. Olivier De Schutter, co-chair of the International Panel of Experts on Sustainable Food Systems and former UN Special Rapporteur on the right to food, says the key lock-in to the current system is that food policies are not democratically shaped, but shaped by the lobbies that try to influence decision makers. “If you could capture the visual image people have when talking about food systems they would see a long chain in which they are just one small segment,” he says. “They would feel completely disempowered by the enormity of the system and the complexity thereof and have no sense that they can become actors. This needs to change.”

Technology may be unleashing the potential for a transparent, productive, sustainable and secure food system, but as it stand it remains just a ‘potential’. Without the governance structures that support a truly democratic food system the risk is that, rather than transforming the way we produce and consume food for the better, a fourth industrial revolution will simply create a whole new set of 21st century challenges. What kind of progress is that?

Nick Hughes is a freelance journalist specialising in food and environmental affairs. He has had articles published in titles including The Times, The Grocer and The Ecologist and is Associate Editor of Footprint magazine.