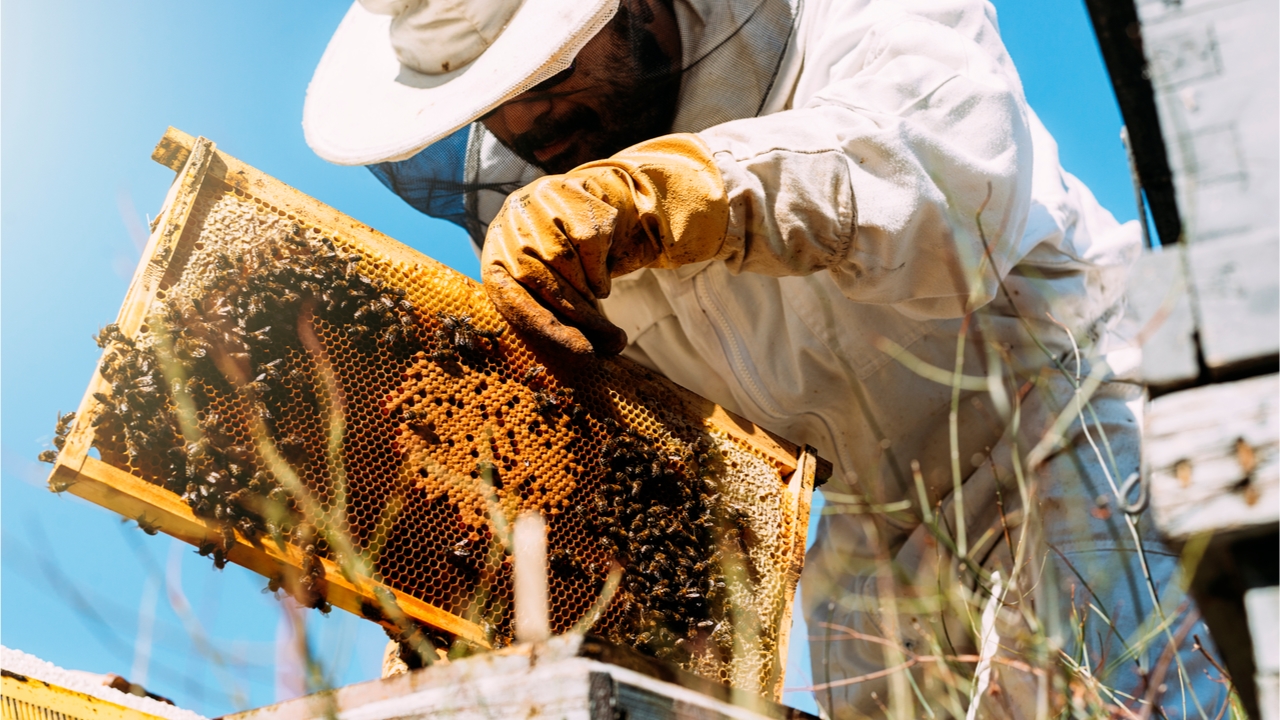 Journalist David Burrows looks into the growing issue of adulterated or “funny” honey and its damaging impact.

There is a problem with honey and the bees that make it. “I am scared,” says Federico Facchin, policy advisor at Copa-Cogeca, which represents farmers and agri-cooperatives in the EU as members prepare for another bad honey harvest this year. “For sure in 2021 we are going to have higher imports.” And that could mean more of the honey available is not what it says it is. According to the Honey Authenticity Project (HAP), one third of honey in international trade is adulterated. Honey is also often cited as the world’s third most adulterated food. Largely this involves the addition of sugar syrups to dilute the product and bring down the price (though mislabelling of the geographic origin is also an issue; honey from China has previously been passed off as Irish). “They’re selling rotten honey,” says Sarah Wyndham Lewis, cofounder of Bermondsey Street Bees and a honey sommelier, and it’s been going on for years.

Indeed, the Netflix docuseries on food called Rotten kicked off in 2018 with an episode on honey. It detailed the game of cat and mouse between adulterators and analysts. “When the number of positive tests we get falls, it doesn’t mean they have stopped adulterating but that they have developed something new,” explained Gudrun Beckh, managing director at Quality Services International (QSI), in the show. “It’s like a competition.”

“When the number of positive tests we get falls, it doesn’t mean they have stopped adulterating but that they have developed something new,” explained Gudrun Beckh, managing director at Quality Services International (QSI), in the show. “It’s like a competition.”

But the scammers are often beating the scientists, which has serious repercussions for beekeepers, their bees, consumers, exporters and food production generally. “There is a huge body of evidence […] that says this honey is fraudulent and you’ve got a bunch of people sitting there with their arms folded and saying no it isn’t,” says Wyndham Lewis. “Everyone’s in denial about the end effect in this.” So what is going on and what can be done about it? 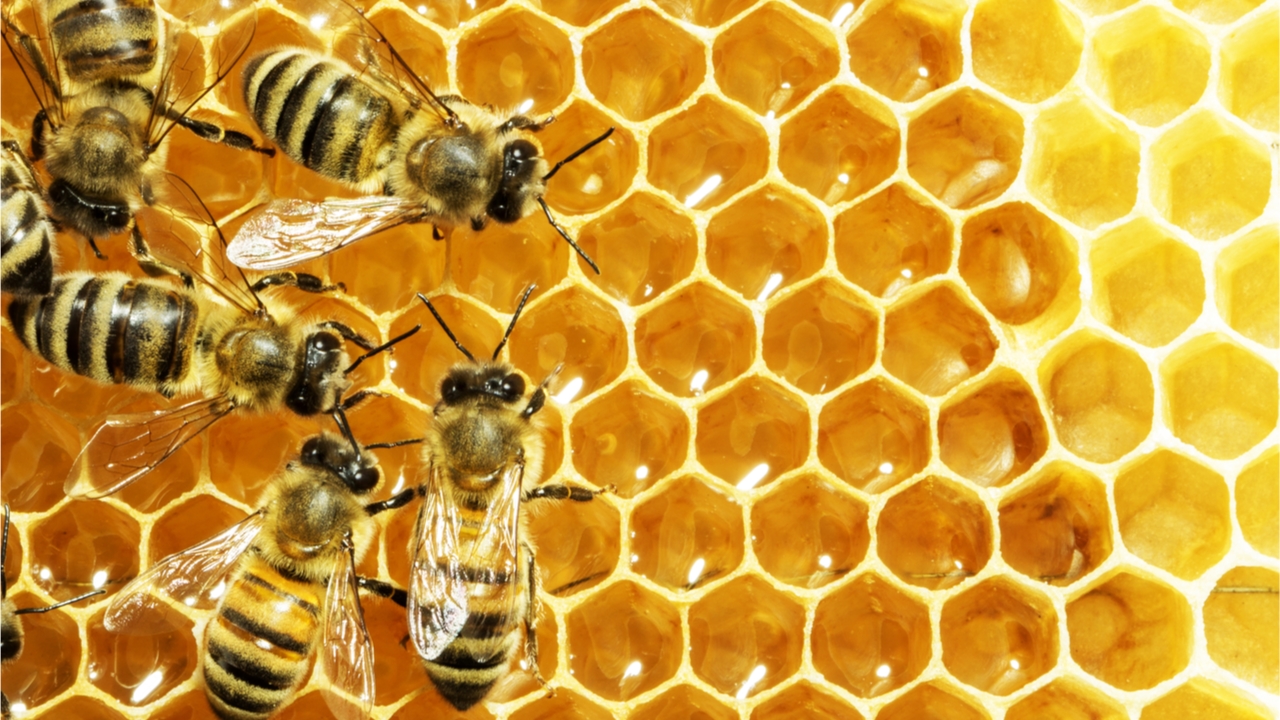 You don’t have to look far to find articles in the media or academic publications about fraud in the honey sector. Big brands and supermarkets in the UK, Europe, Australia and Canada have all been caught in this particular trap.

A study by researchers at Macquarie University, Sydney, Australia, published in Scientific Reports in 2018, showed, of 100 commercial honey samples from 19 countries, 27% were of “questionable authenticity”. “There is no evidence that adulterated honeys cause any significant health risk (beyond those posed by eating sugary foods anyway),” they wrote in an accompanying blog for The Conversation. “However, in many cases consumers are not getting the supposedly genuine pure honey they have paid for.”

In 2016 the European Commission Joint Research Centre tested 893 samples of honey from all stages of the supply chain against the directive. Some 127 (14.2%) were regarded as “suspicious of being non-compliant”; 16.3% of samples from retailers were also deemed to be suspect.

So vast tonnages of so-called ‘funny honey’ are likely being shipped, sold and spread every year. Consider, for example, that in 2018 the EU produced 283,000 tonnes of this natural sweetener, while globally the figure is around 1.9m tonnes (from 90m managed beehives). Honey is often seen as the ‘better sweetener’, as natural and pure and can have therapeutic qualities (Irish heather honey has “similar physiochemical characteristics to Manuka honey [and] should be examined for potential health benefits”, noted experts from Dublin City University and Trinity College Dublin in a Food Chemistry paper in 2019). Put all those qualities together and you get high demand. Throw in problems with authenticity testing, lack of regulation and ambiguous labelling laws and you have a compelling case for criminals to target it. And they have.

Honey is often seen as the ‘better sweetener’, as natural and pure and can have therapeutic qualities (Irish heather honey has “similar physiochemical characteristics to Manuka honey"). Put all those qualities together and you get high demand. Throw in problems with authenticity testing, lack of regulation and ambiguous labelling laws and you have a compelling case for criminals to target it. And they have. 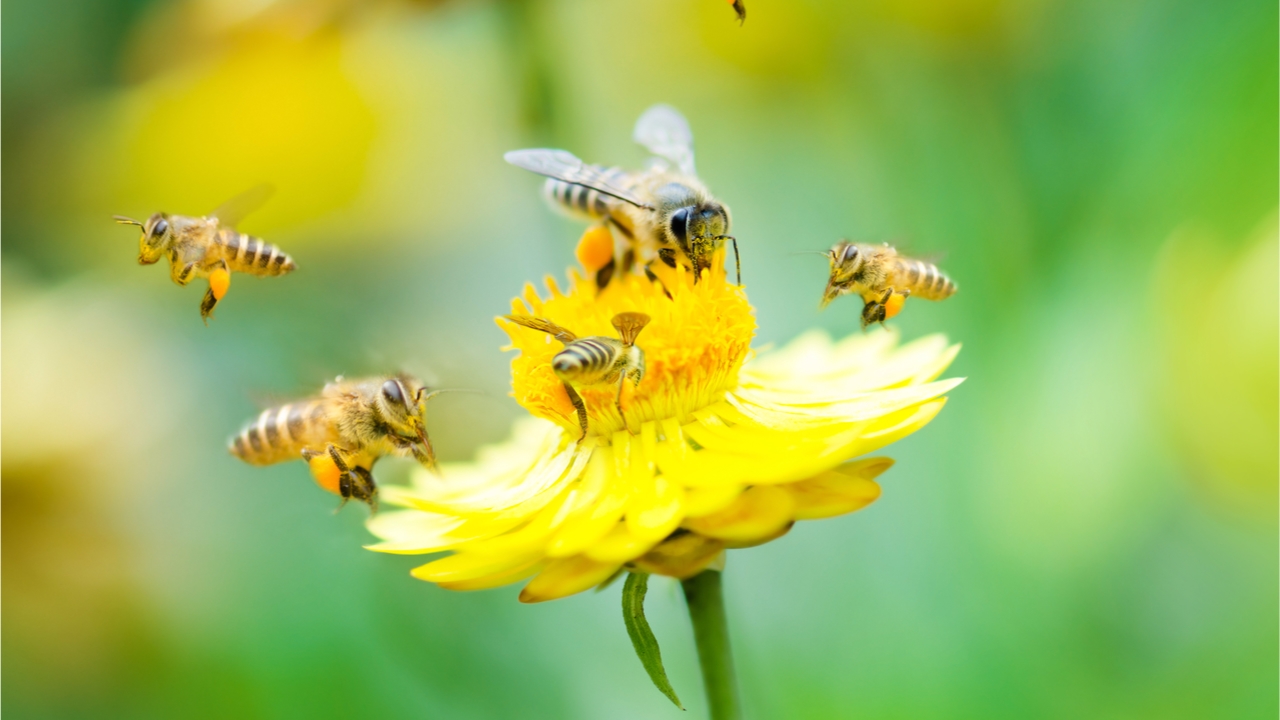 We know this by looking at supply and demand. It’s no secret that bees everywhere are struggling against a combination of stresses: insecticides, parasites, monoculture and of course climate change (they are “‘the canary in the coalmine’, a guide to the health of the planet”, noted Alison Benjamin and Brian McCallum in their book, A World Without Bees). Production levels are falling, which poses threats not just to the honey farmers - pollinators, including honeybees, bumblebees and wild bees, contribute at least €22bn each year to the European agriculture industry and ensure pollination for over 80% of crops and wild plants in Europe.

Usually this would mean prices go up as diminishing supply fails to meet rising demand. Not so in honey. “We know there have been drops in production [lower harvests and loss of beekeepers] and yet the volumes continue to increase and the price continues to come down,” explains Kimberly Carey Coffin, global technical director (supply chain assurance) at Lloyd’s Register. “The laws of supply and demand don’t seem to apply.”

In a 2020 paper, Copa-Cogeca noted that prices for imported Chinese honey were coming in at around €1.3/kg. In the EU, the average cost of production alone is €3.9/kg. What gives?

For a start, and most importantly, the Chinese definition of honey differs from the codex alimentarius used in EU legislation, says Facchin. Honey is harvested with a “big degree of humidity”, (under the UK honey regulations it can’t contain more than 20% moisture, for example). Production therefore takes less time, the product is heavier (containing more moisture) and can therefore be sold at much lower prices.

These are squeezed down further if the honey is bulked out with sugar syrup, as Copa-Cogeca suspects is the case with Chinese exports. Imports from Ukraine also jumped from 20,000 to 47,000 tonnes between 2013 and 2017, with prices dropping to €1.69/kg in 2019. These volumes and prices “give grounds for suspicion that undetectable sugar syrup is being used”, the farming group noted.

Given that €4/kg farm gate price for EU beekeepers, it will be no surprise to hear that more and more are throwing in the towel. “As China, India and other high-volume producers flood world markets with low-quality but highly sophisticated fraudulent ‘honey’, this dirty trade costs authentic producers dearly,” Wyndham Lewis wrote in a blog for Slow Food recently. 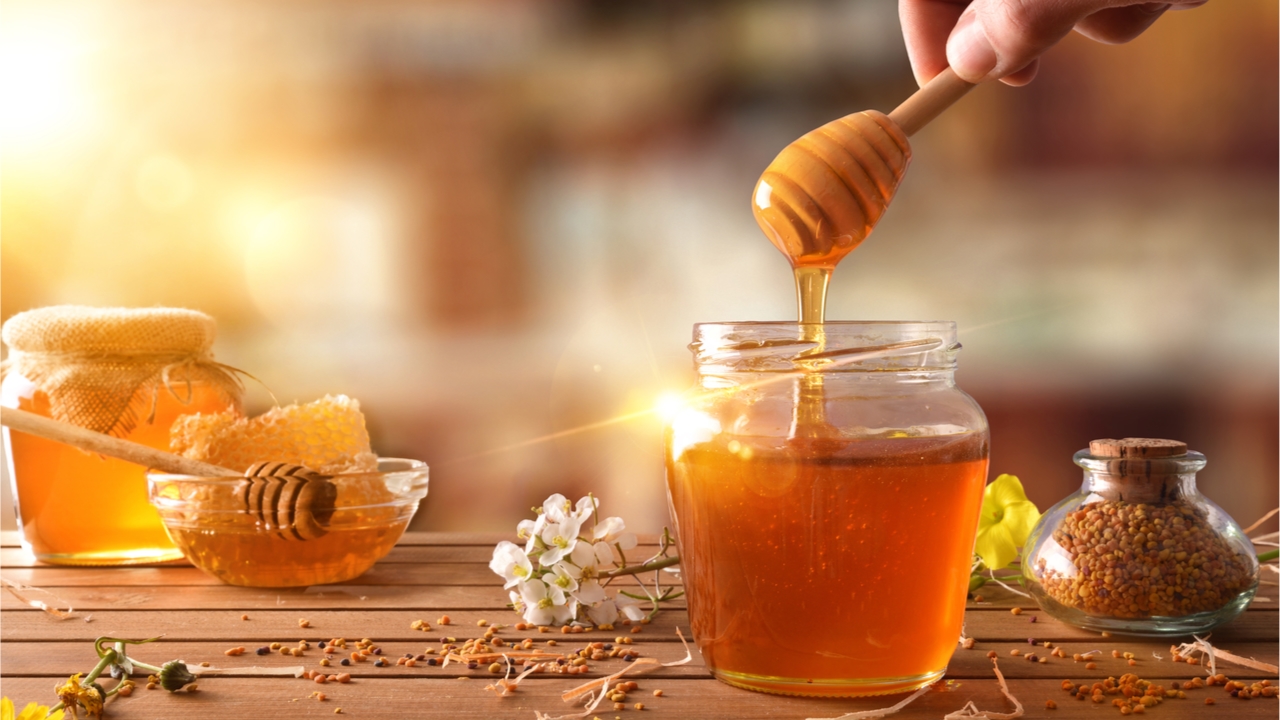 Detecting this fraud is not straightforward though. “There are nearly as many types of testing methods for honey as there are honey types,” wrote Professor Chris Elliott from the Queen’s University Institute for Global Food Security recently. “[…] in one quick search, I found well over 100 scientific publications on the topic.” Nearly all of them currently have limitations giving fraudsters the upper hand. Syrups are switched (so beating tests like the one to detect C4 sugars) or engineered to more closely mimic honey (thus dodging a liquid chromatography/isotope ratio mass spectrometry analysis).

Making a claim stick isn’t easy, as a high profile case in Australia in 2018 proved. Of 28 honeys tested at QSI’s lab by nuclear magnetic resonance (NMR), 12 were not 100% pure honey. Australia is among the world’s top five exporters of honey so the findings posed a threat to the country’s reputation. The Australian Competition and Consumer Commission opened an investigation, concluding in November 2018 that NMR testing “is not yet reliable enough to determine whether honey is adulterated and therefore should not be used as a basis to support legal action. This is consistent with the approach of regulators in the UK, US and the EU.”

What it did find is that the current test method wasn’t up to the job either, with all 28 samples passing the C4 test. More work is needed on NMR, which works by generating magnetic signatures for each sample that can then be compared to genuine honeys. But as Elliott explained in an interview with Wired in January: it is a “wonderful technique but it’s only as good as your databases”. For wine there are already over 25,000 samples on the database, he noted recently, and the scale of those available for honey are not likely to be “even close [to that]”. Regulators must work together on more robust testing, he added.

Better testing isn’t the only solution. Labelling is also an issue. For honey originating from more than one EU country or a non-EU country, it is mandatory to label it as either ‘blend of EU honeys’, ‘blend of non-EU honeys’ or ‘blend of EU and non-EU honeys’. The latter is the one causing concern because there is no threshold for the EU content. As Facchin explains, 1% can be from Belgium or Italy with the rest made up from imports priced at €1.3/kg. “The consumer thinks there is some from the EU so it’s fine.”

Some member states have introduced laws mandating that countries are listed individually on the labels. Facchin wants to see this across the EU, ideally with percentages alongside each country: “We are not against blends [but consumers have] to know where the honey comes from.” Slovenia is keen to push the issue when it takes on the presidency of the council of the EU in July 2021, but the costs to producers and the benefits to consumers need to be carefully weighed up, suggests Coffin at Lloyd’s Register.

Wyndham Lewis and her husband Dale Gibson at Bermondsey Street Bees test their honeys to ensure they are exactly what they should be. This costs money and takes time, though. During their time keeping bees, around half a dozen assurance schemes have been proposed before fading away. Regulators and trading standards meanwhile are cash-strapped (she cites how fake honeys in the UK identified by HAP and flagged to councils have resulted in no action).

The food industry and governments need to take more responsibility, she says. “We are banging our fist on the table to say will somebody somewhere take notice and set up an effective consumer-led or regulation-led campaign to actually turn this on its head to make it something people are aware of and won’t put up with?”