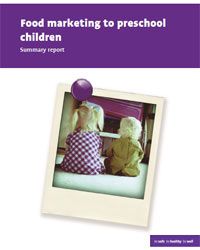 Research has shown that preschool children’s dietary habits and body weight can be affected by food advertising. Multiple techniques and channels are now used to reach young populations to foster brand awareness and influence purchasing behaviour. These food marketing channels include television and radio advertising, in-school marketing, product placements, kids’ clubs, the Internet, and toys and products with brand logos. Young children lack the cognitive skills and abilities of older children and adults to comprehend commercial messages and therefore are uniquely susceptible to advertising influence.

The media landscape is changing rapidly, even for very young children. In the past children’s television programming was restricted to time slots unpopular with adults, such as the after school period and Saturday mornings. In this new multi-channel era, there are numerous television stations exclusively devoted to children. Young children may also enjoy early evening programming, which may be aimed primarily at adults and which is not subject to children’s advertising codes. Equally, on the island of Ireland internet penetration is growing rapidly. At this point it is not known how many children under the age of five use the internet (for games etc.) and there is as yet almost no evidence is yet available in the public domain regarding how children respond to advertising in new media environments.

Research shows that children can be successful at influencing their parent’s food purchasing. Parents have reported yielding to children’s purchase requests has been reported in studies that rely on parent self-reports as well as unobtrusive observation of behaviour in the supermarket. A huge body of recent work has emphasised how interventions later in the life-cycle build on interventions that have taken place earlier. The implication from this literature is that early-interventions pay-off for longer and also are complementary with later interventions. This suggests that controlling exposure to advertising of unhealthy foods to preschool children may have far reaching benefits.

This report aims to investigate the level and types of exposure of young children (2-5 years old) to advertising of unhealthy foods and to examine its influence on family food purchases, children’s eating behaviour and their body weight.