Should insects be on the menu? 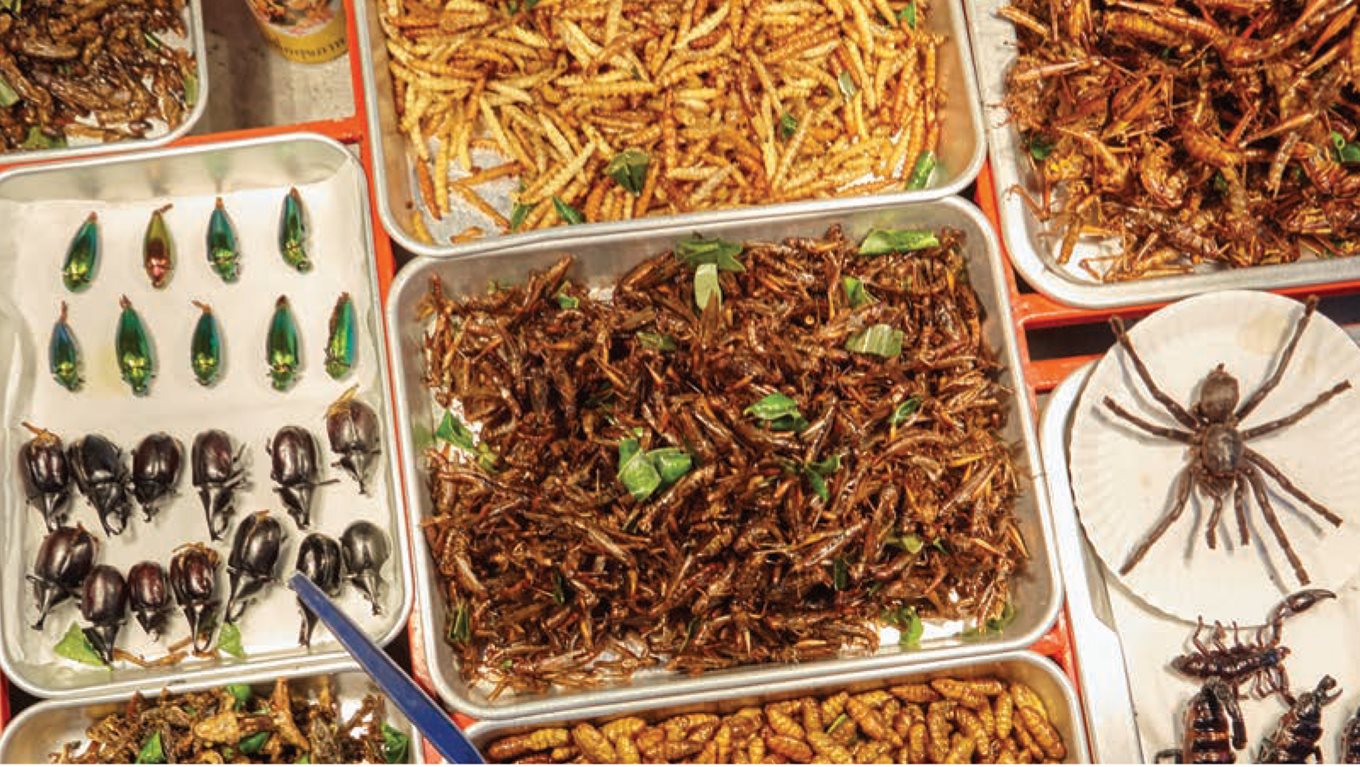 In some parts of the world edible insects are a common dish. Should those of us in the west be considering them as a food source too?, asks journalist David Burrows. In the west, insects are not part of our traditional diet. The very thought of eating a mealworm or a cricket is, to many of us, disgusting. “Last week in Malaysia I ate the larvae of black soldier fly as a snack – I’m not expecting to give up potato crisps any time soon,” said Professor Peter Gregory, chair of the UK’s advisory committee on novel foods and processes, at January’s Westminster Food and Nutrition Forum. Gregory might not be a converted insect eater, but there is an argument that more of us need to overcome our neophobia in order to tame climate change and put the brakes on biodiversity loss.

The argument goes like this. Insects are a far more sustainable protein source than traditional meat, using less land, less water and generating fewer greenhouse gases. They could also enhance the circular economy, through for example using by-products from the food sector as feed. “Insects are the apex of the recycling world. All we are trying to do is mimic that,” said Keiran Whitaker, CEO and founder of Entocycle, the UK’s first insect production facility, in an interview with The Grocer. Their feed conversion efficiency statistics are also impressive, being respectively two, four and 12 times as efficient as poultry, pigs and cattle in converting what they eat into ‘meat’. As the UN Food & Agriculture Organisation put it in its 2013 book, Edible Insects: future prospects for food and feed security, “insects are everywhere and they reproduce quickly, and they have high growth and feed conversion rates and a low environmental footprint”. 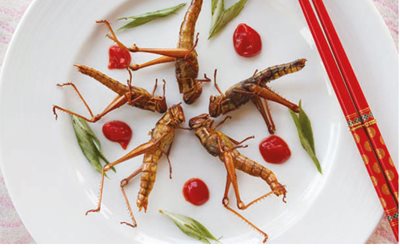 Research into the nutritional composition of edible insects offers further promise. For example, the crickets and mealworms that are the focus of much attention in Europe have a fresh weight protein content of between 19% and 22% – which is comparable to conventional meat. Their fatty acid profile – which is more polyunsaturated – has also been shown to be proportionate to that of fish and poultry. There is even some evidence emerging of the probiotic benefits of some insects: eating cricket powder can support the growth of probiotic bacteria, for example.

With all this in mind – and given the food security challenges facing the world as population grows and resources run out – it’s not surprising insects have been thrust onto the table as a viable food group. “I started looking at this 20 years ago and nobody was aware you could eat insects – and now everybody knows about it,” explains Professor Arnold van Huis, an expert on the topic from Wageningen University in the Netherlands, and chief editor of the Journal of Insects as Food and Feed. Van Huis also coedited the FAO book, which arguably spawned interest in this novel foodstuff. “It’s still niche [but] you never know how it will take off,” he adds.

Global Market Insight forecasts that the European edible insects market – led by Germany and France – will grow 43% between 2018 and 2024. Meanwhile, Meticulous Research says the global market will reach $7.96 billion by 2030, with almost 733,000 tonnes harvested. The fastest growth will be in protein bars and shakes. “We’re starting pretty much from scratch but there’s plenty of potential,” says Rich Ford from Sherlock Studio, a design agency that recently repositioned Crunchy Critters, the longest established edible insects brand in the UK. As Ford notes, insects have been part of the food chain for some time but are often hidden – think cochineal, a food dye made from cochineal bugs that is often labelled E120. Key to future market growth will be to make any bug content blatantly obvious, he says. 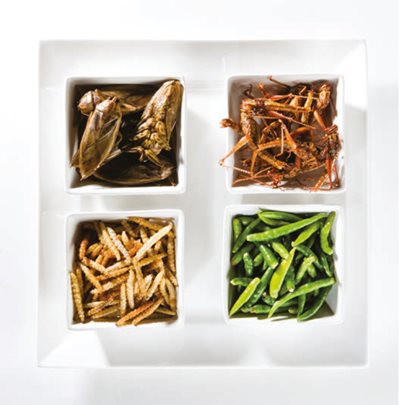 The idea that insects could become mainstream has prompted a rethink of European rules. It was back in 1997 that the EU introduced regulation number 258/97, which concerned novel foods and novel food ingredients. However, the rules weren’t particularly clear when it came to insects (this was 1997 don’t forget). The text mentioned food ingredients “isolated from animals” but when companies started looking at selling whole insects or ingredients made from them (like flour) there was confusion. “Some countries [like France, Spain and Sweden] took the stance that whole insects were novel foods and therefore needed approval, whilst others [including the UK] took a more relaxed approach,” explains Nicolas Carbonnelle, head of the food and beverage practice at international law firm Bird & Bird. Authorisation was also a headache: the process took ages (prompting several French manufacturers to look at the UK market when their domestic one became more restrictive).

But in January 2018 a reformed and recast novel food regulation (2015/2283) came into force. This “improves conditions so that food businesses can easily bring new and innovative foods to the EU market, while maintaining a high level of food safety for European consumers”, said the European Commission. The first notable change was that insects were mentioned explicitly. “... on the basis of scientific and technological developments that have occurred since 1997, it is appropriate to review, clarify and update the categories of food which constitute novel foods. Those categories should cover whole insects and their parts.” So they now require approval from the European Commission, which brings us to the second change: the centralisation of the authorisation process. Once approved, the novel foods are added to a Union list. What’s more, the process is generic, so once a food makes the list any business can sell it (in accordance with the conditions of use, labelling requirements and so on).

So, which insects are on the list? Well, as of December 2019, none. Yet. Twenty applications have been submitted to the European Food Safety Authority (EFSA) for insects including house crickets, black soldier flies and mealworms. According to IPIFF, the International Platform of Insects for Food and Feed, 11 have passed the validity check but the rest are incomplete. However, of the 11 only three have so far fulfilled the ‘completeness/ suitability check’ and are due to be assessed by the authority.

Demonstrating that something new is completely safe is a tricky exercise,” Carbonnelle notes. “But you have to get this right, otherwise it could kill the sector before it’s started.”

Insects have of course been eaten in other parts of the world for centuries, but the difference here is the ambition to intensify and scale the process. “We know how to produce 100 tonnes but we’re not sure how to do 100,000,” says Vincent Doumeizel, head of the food programme at Lloyd’s Register Foundation. There is a lot we don’t know and there are a lot of gaps in our knowledge. As EFSA noted in its 2015 risk profile on production and consumption of insects for food and feed, “there are no systematically collected data on animal and human consumption of insects”. Particular attention needs to be paid to the specific production methods, the substrate used (for feeding the insects), the stage of harvest, the insect species and developmental stage, EFSA noted.

There was another significant observation in EFSA’s summary:

“When currently allowed feed materials are used as substrate to feed insects, the possible occurrence of microbiological hazards is expected to be comparable to their occurrence in other non- processed sources of protein of animal origin.”

This proved to be the launch-pad for a revision of the feed ban rules (which hark back to the BSE crisis). By December 2016, the European Commission had voted to open the aquaculture feed market for insect-derived protein from July 2017. It’s still early days but there is “huge interest”, says Julie Hesketh-Laird, chief executive at the Scottish Salmon Producers Organisation.

Now the hope is that authorisation for pig and poultry feed will follow. Producers are keen to access the new feed, which could help replace some of the soya in livestock diets. “We are a long way off commercial viability,” said Máire Burnett, technical director at the British Poultry Council at January’s ‘Pigs and poultry – optimising production’ event near Edinburgh, Scotland, organised by Moredun Research Institute (MRI). “[Due to the regulations], we can’t even do small trials yet [but] we are hoping to see some changes this year.”

What farmed insects are fed on tends to be a closely guarded secret. Feed them on the same things that livestock eat and any hazards will be comparable to other animal proteins, says EFSA. However, the race is on to find the perfect ‘waste’ feed, which will not only improve the economics of the production systems but also reduce its environmental impacts. This is an opportunity to put the circular economy in practice, provided the food safety box can be ticked.

EFSA’s first decisions are expected sometime this year. For the time being, the insects available to buy in shops or at restaurants fall into two categories: either they are illegal – “it happens more often than you might think,” says Caroline Commandeur, legal consultant at the law firm Keller and Heckman – or they are benefitting from the transitional measures in the novel food regulation. This allowed whole insects of a specific species (or a product thereof) to be placed on some national markets, provided: the relevant authority considered them not covered by the previous novel food regulation; they were legally placed on this national market before 1 January 2018; and on the condition that an application for authorisation under the new regulations was submitted before 1 January 2019. There is also legislation on food hygiene and food information to consumers for example that “is likely to ensure the compliance and the safety of these products during the transition period”, according to IPIFF.

Those rearing and selling insects are out to prove their products are both safe and sustainable (some research has showed crickets fed poultry feed offered “little improvement in protein conversion efficiency”, which is a key metric in determining the ecological footprint of grain-based livestock protein). Questions on welfare are also likely to crop up: Compassion in World Farming has found some evidence that insects are sentient, but until we know more they should be “given the benefit of the doubt”. Another outstanding issue relates to allergenicity, with research having shown that those allergic to shrimp are “highly likely to react to mealworms in the same way”. Currently, the EU’s allergen list is a closed loop but as understanding evolves and insects creep into more products the list could be extended.

As Van Huis notes, this is a sector in its infancy with lots to learn on everything from genetics to feed. “A lot of things have to be done before they are competitive [with other proteins],” he says. The glare of those ‘obsidian eyes’ will be hard to shake but there is little doubt edible insects are in the spotlight.

David is a freelance specialising in sustainability  and food/retail.  A graduate in agricultural sciences and a post graduate periodical Journalism - David is currently freelance writer, editor and researcher for serveral food business publications including Poultry Business, Farmers Guardian and Retail Week.

Covid-19 and food culture COVID-19 has thrown the global economy into a crisis that threatens to surpass the economic and financial damage inflicted back in 2007/08. Economist Jim Power looks at the implications for the food sector.
The impact of Brexit on food production and trade on the island of Ireland by Phelim O’Neill
What exactly do we mean by food security? There’s a growing realisation among governments, academics and businesses that long-term food security can only be achieved if that same food can be produced within the capabilities of our planet. By Nick Hughes