What is ethylene oxide and why is it an issue? 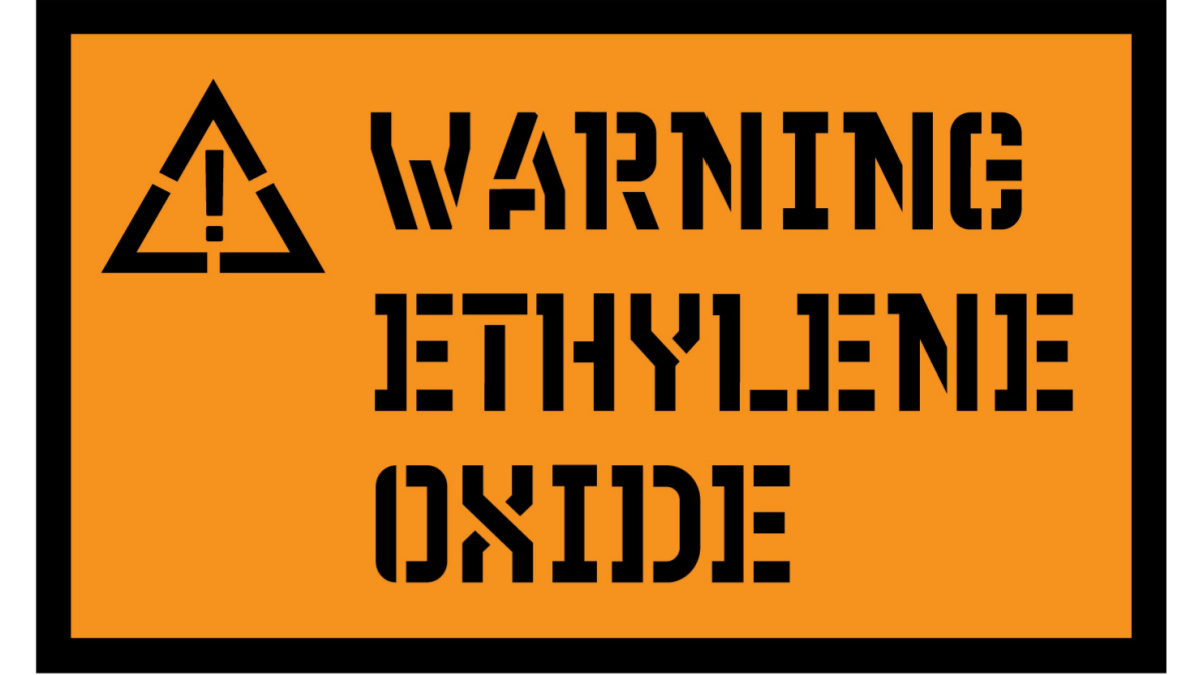 While ethylene oxide is banned in the EU, food safety alerts arising from imports are on the rise. Robert Levermore looks at the issues.

Ethylene oxide is a gaseous substance with a range of potential applications, mostly stemming from its highly reactive nature.  It has been historically used in the food industry as a fumigant because of its capability to disinfect without using heat treatment.

However, the fumigation of foods and food storage areas with ethylene oxide has been discontinued in much of the world, including the EU which banned the use of ethylene oxide as a pesticide in 1991, due to its highly toxic nature.  Specifically, ethylene oxide is classed as a germ cell mutagen, a carcinogen and a reproductive toxin.  The EU set out its maximum residue levels (MRLs) for ethylene oxide in a range of foods and products in regulation (EC) No 396/2005 and its subsequent amendments.  These levels vary from 0.02mg/kg to 0.1mg/kg, depending on the nature of the product (1).  The current UK regulations regarding ethylene oxide mirror those of the EU (2).

Specifically, ethylene oxide is classed as a germ cell mutagen, a carcinogen and a reproductive toxin.

The beginning of the issue – sesame seeds

In September 2020, an EU Rapid Alert System for Food and Feed (RASFF) (3) alert indicated that samples of sesame seeds imported from India were found to contain unacceptable levels of ethylene oxide, the use of which is banned in the EU.  This was the first of many such alerts and by the end of 2020, over 300 further alerts related to sesame seeds or products containing them as an ingredient had been submitted to RASFF.  The European Union responded to this issue with the publication of Commission Implementing Regulation (EU) 2020/1540 (4), stipulating that sesame seeds originating from India must be tested for the presence of ethylene oxide prior to export to the EU.

Ethylene oxide alerts kept being raised throughout 2021 and while many of the issues continued to relate to sesame seeds, the range of products affected was clearly increasing.  This increase aligned with an increase in the amount of testing incorporating a range of almost exclusively dry or dried goods including herbs, spices and cereals.  Food additive products such as xanthan gum (E415), locust bean gum (E410), and guar gum (E412) were also subject to a range of alerts.

Ethylene oxide alerts kept being raised throughout 2021 and while many of the issues continued to relate to sesame seeds, the range of products affected was clearly increasing.  This increase aligned with an increase in the amount of testing incorporating a range of almost exclusively dry or dried goods including herbs, spices and cereals.  Food additive products such as xanthan gum (E415), locust bean gum (E410), and guar gum (E412) were also subject to a range of alerts.  In response to such an issue, specifically with locust bean gum, reported on 8th June 2021, the European Commission convened on three occasions with representatives of its member states, Iceland, Norway, the European Food Safety Authority (EFSA) and relevant European Commission departments to discuss how to respond to the issue (5).  The response took into account the large number of previous incidents, but particular note was taken of this incident in view of the nature of locust bean gum as a food additive.  The considerable range of products to which it could be added including, but not limited to, yoghurt, cream cheese, dressings, ice cream, fruit preparations and infant formula, presented considerable potential risk.

At the meetings, discussions were held regarding the appropriate action to take with regards to this specific incident and to ethylene oxide contamination more broadly.  A limit for ethylene oxide and 2-chloroethanol in food additives such as gums and similar materials, which are not covered by 396/2005, was set at 0.1mg/kg.  Discussions were held with regards to balancing protection of consumers against avoiding unnecessary food waste and loss.  In this case, the eventual position taken was that due to the carcinogenic nature of ethylene oxide, no safe level of exposure could be defined and thus any contaminated product on the market must be withdrawn and product recalls carried out.  While 2-chloroethanol itself is not classified as possessing the same mutagenic, carcinogenic and reprotoxic classifications as ethylene oxide, the position was taken that given the presumed source of 2-chloroethanol as from ethylene oxide and lack of conclusive information regarding the risks related to this compound, both compounds should be treated in the same manner.  Therefore, no safe level of exposure could be defined for 2-chloroethanol.  Following dissemination of this information, however, debate continued on how the guidance provided should be implemented and further documentation was issued summarising the meeting with a view to achieving greater clarity on the discussions and the positions arrived at (6,7).

On 11th August 2021, a RASFF alert for ethylene oxide contamination in calcium carbonate was raised, followed by another six similar alerts before the end of the year.  Calcium carbonate, in addition to being used as a food additive, is also widely used as an excipient in nutraceutical capsules and similar products.  Once again, this broadening of the scope of the issue led to further debates between industry and government bodies.  The Health Food Manufacturers’ Association raised a number of points regarding the contamination, including indicating that it was not certain whether the ethylene oxide was the source of the 2-chloroethanol detected in the calcium carbonate (8).  This and other responses demonstrate that some individuals and groups are of the opinion that the current approach taken by the EU could potentially be relaxed to some degree, even if only in cases of contamination where just 2-chloroethanol was detected.  However, as things currently stand, the European authorities maintain their position.  In an article published in the European Food Safety Authority (EFSA) Journal on 25th February 2022 (9), EFSA stated that based on the data currently available, they ‘could not conclude on the genotoxicity and carcinogenicity of 2-chloroethanol and therefore no safe level could be derived’.  They did however also indicate that ‘if the genotoxic potential of 2-chloroethanol is finally clarified and overall negative, EFSA would recommend setting the reference point for deriving health-based guidance values based on existing toxicity studies on 2-chloroethanol’, allowing for the possibility of a softening of their position in the future.

At the time of writing, 837 RASFF alerts have been raised for ethylene oxide and/or 2-chloroethanol contamination, with the most recent coincidentally being for sesame seeds, arriving in France from the Netherlands.  The issue shows no sign of abating, with 26 alerts raised in April 2022 alone.

At the time of writing, 837 RASFF alerts have been raised for ethylene oxide and/or 2-chloroethanol contamination, with the most recent coincidentally being for sesame seeds, arriving in France from the Netherlands.  The issue shows no sign of abating, with 26 alerts raised in April 2022 alone.  The levels of contamination vary enormously from one instance to another.  The levels referred to in the RASFF alerts range from just above the MRLs or agreed limits for the products to over 1,000mg/kg.  To put such results into context, however, the MRLs in sesame seeds for ethylene oxide and 2-chloroethanol in Canada and the USA are 7mg/kg and 940mg/kg respectively (10, 11).  On this basis, then, while clearly unacceptable in the EU and UK, all but the highest levels of contamination in these samples could potentially be allowable in these countries and while different parts of the world continue to treat these compounds so differently there will, of course, be a significant risk of unacceptable levels of contamination of materials being imported from these countries.

Analysis for ethylene oxide and 2-chloroethanol

Analysis of samples for these analytes is not entirely straightforward, due both to the highly volatile nature of ethylene oxide and to the very low reporting limits required for many sample types.  The analyses are invariably carried out using some form of gas chromatography/mass spectrometry, but laboratories use a number of different extraction procedures.  It is possible to analyse ethylene oxide itself, but many methods convert the ethylene oxide to a less volatile compound more amenable to the analysis.  The chosen compound is often 2-chloroethanol but 2-bromoethanol and 2-iodoethanol would also be possible choices.  Regarding conversion to 2-chloroethanol, while this does not currently present an issue, it may do so in the future if regulations or advice change such that different actions would be taken depending upon whether products were contaminated with ethylene oxide or 2-chloroethanol.  In this instance, it would be necessary to be able to quantify the two compounds separately, either by measuring ethylene oxide as itself or converting it into a compound other than 2-chloroethanol.

Dealing with the issue

With food businesses responsible for the safety of their products, testing for the presence of ethylene oxide residues in or on food items is essential.  As per current practice, if MRLs are exceeded then affected products must be withdrawn from the market and recalled from consumers, at considerable expense and damage to the profile of the products.

The risks of such issues can be mitigated by using trusted suppliers combined with testing of any products believed to be at risk of potential contamination.  Carrying out tests on raw ingredients is preferable to finished products and ideally such testing should be carried out prior to the shipping of materials.  As already detailed, this is an active area with regards to discussions both in industry and regulatory authorities, and guidance may well be amended in the months and years to come.  It is therefore important to keep abreast of any developments going forwards.

Robert Levermore has worked for Campden BRI since 1993. Rob began his career at Campden in the Biochemistry Section of the Chemistry and Biochemistry Department, where he assisted with a number of research projects, before moving into the Flavour and Taint Group in 1996, becoming manager of the group in 2005.

As Flavour and Taint Group Manager, Rob undertakes a wide range of analyses, covering both targeted analytical work for specific tainting compounds, and general screening of samples where a tainting odour or flavour has been detected, but its source is not known. He also provides expert advice on the results obtained, producing interpretative reports to assist clients in finding the root cause of any problems, and avoiding similar occurrences in the future.

Rob is also heavily involved in Campden BRI's work with Her Majesty's Revenue and Customs, providing both analytical services and technical advice. He also represents HMRC as the UK chemical delegate at a range of European Union meetings, both in Brussels and elsewhere.